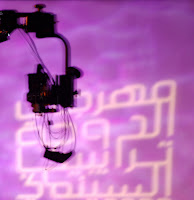 I went to the Doha Tribeca Film Festival opening on the 29th and saw Amelia on a 24m by 10m HD screen (it took 150 people to assemble) outside in the lovely evening air. As we watched, planes landing and taking at the close-by airport to our right provided a fascinating juxtaposition to the story. Fireworks exploding after the film offered a dramatic backdrop to the museum. Below is a slide show of a handful of photos and captions.

From the Gulf Times, October 30.
Film Festival Takes Off

Around 5,000 film lovers flocked to the Museum of Islamic Art (MIA) grounds last night, to take part in the opening night of the Doha Tribeca Film Festival (DTFF), where they watched the Middle East premiere of Mira Nair’s biopic, Amelia.
People of all ages, nationalities and cultures sat together in the deckchairs in front of the specially constructed 24x10m screen, which took 150 people to build. It is the largest temporary structure ever to be built in Qatar, according to organisers.
Earlier, the opening day of the festival included a lunch which was attended by organisers and many of the luminaries attending and participating in the festival, such as Martin Scorcese, Mira Nair and Sir Ben Kingsley among others.

Luminaries from the world of Arab and international cinema have hailed the launch of the inaugural Doha Tribeca Film Festival (DTFF) as a major step for film in the region, and expressed their hope that the event will signal a year-round effort to develop film in the Middle East.
As Doha residents awaited the screening of Amelia to mark the opening night of the DTFF yesterday, stars from the worlds of film, fashion, music and the arts made their way down a unique red carpet at the entrance of the Museum of Islamic Art.
Sir Ben Kingsley proved to be one of the most popular stars to walk down the carpet, with members of the public screaming out to the renowned actor.
Kingsley, who is also in Doha to receive a humanitarian award tonight, graciously answered all the questions screamed at him and argued that a lot of good can be achieved through film. He gave the examples of Gandhi and Schindler’s List as two films which have helped educate generations and raise awareness of the suffering of people around the world. “Now most schoolchildren in the world have watched these films and have learnt about what happened.”