This week-end's paper had some pieces underscoring the connections between the US and the mid-east and Qatar, as well as a piece about an overturned SUV, that uses some interesting phrases.

A Mitsubishi Galloper overturned at Airport signal yesterday evening causing traffic disruption for around 15 minutes. The vehicle, which was coming from Al Mana signal at a high speed, turned turtle after the driver apparently applied brakes. Interestingly, the driver and a passenger in the vehicle ran away before the police arrived at the spot. 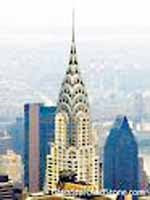 New york • New York’s Chrysler Building, a skyscraper icon, is being targeted for purchase by a Middle East sovereign wealth fund, the US media reported yesterday.
The Abu Dhabi Investment Council, an investment arm of the Gulf emirate, is in talks with a subsidiary of Prudential Financial Inc to pay $800m for a 75 percent stake in the Art Deco treasure, the Wall Street Journal reported, citing a person familiar with the matter.

US-Qatar nuclear deal likely next month
Web posted at: 6/13/2008 2:56:18
Source ::: The Peninsula/ by Rabin Gupta
Doha • A Memorandum of Understanding (MoU) between Qatar and the US related to nuclear energy could be signed as early as next month, Jackie Wolcott, US Special Envoy for Nuclear Non-Proliferation, said here yesterday.
Qatar, along with other GCC states like Kuwait, Bahrain, the UAE and Saudi Arabia, have expressed interest in developing nuclear energy for peaceful purposes. “The (Bush) administration is very supportive of nuclear energy. If countries comply with the Non-Proliferation Treaty (NPT), we want to help them do it the right way."
However it is yet to be decided, at least formally, on whether the GCC states will proceed with nuclear development en bloc or individually. It could well be a combination of both as some countries are better off than others financially. “Our talks have been positive and we have talked to others in the region. There has been talk of a GCC-wide approach to nuclear energy and we listen to what they say,” said Wolcott.

Countries like Qatar are looking to the long-term as they seek to move away from finite oil and gas reserves for their energy needs. Wolcott emphasised matters are at a very early stage of consideration on the part of countries in the region but the US is delighted the GCC is looking at the possibilities in a responsible way. “We have a lot to offer on nuclear energy development. The GCC countries want to do it in the right way and be transparent," she said.
Posted by Susan at 9:08 AM

Leaving work the other night, it became immediately ‘clear’ that we were once again in the midst of a high wind sandstorm. Travelling from underground garage to car to road to underground garage avoids the worst of it. The workers, faces covered with cloths, sometimes crouching to avoid the wind, suffered far more. The next morning dawned crisp and clear – incredibly unusual for Doha - and if I weren’t due at work I’d have stopped to take some photos of the buildings. I planned the next morning, Friday, to do just that. Friday dawned with high wind and sands and has continued so through the week-end. Since Wednesday evening brought to the end Qatar’s bid for the 2016 Olympic games, I wanted to capture at least one striking image – the sharpshooter featured on a major building near me. It is unfortunately taken under fairly extreme sand and wind. 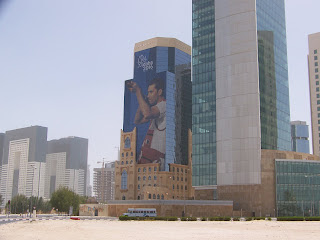 This apartment is located in a true construction site as a few photos will show - some of buildings, some of constrction and some of the workers. The workers, usually here from India, Pakistan, the Philippines, are bussed in each day and the photos shown are of the views from my windows. It's a slight glimpse of the flow of workers around the Doha, the region, and, in fact, the world. 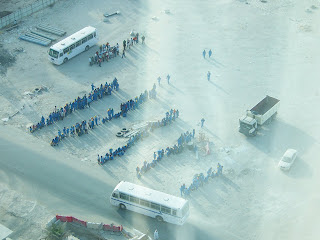 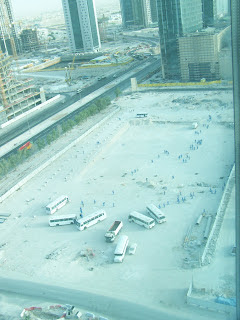 Cleaning of the windows in the apartment tower had been promised and only recently began – to avoid the heat they do it from 6pm to 6am, hanging in baskets from cables. The weather stopped this activity with only 1 ½ windows cleaned – I hope the same 1 ½ for the 40 floors of the tower. That had been enough for me to run to the camera so I could share images of the view from the 16th floor in the midst of the city, early morning when I am home, hence the color. Who know when we will see the cleaning resume? 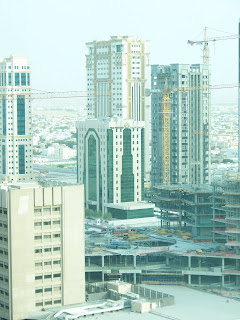 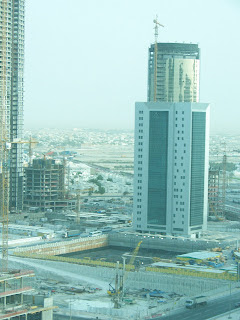 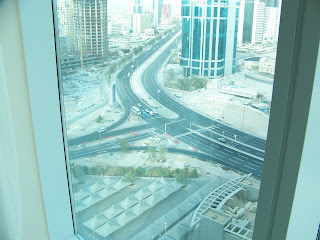 Just a week later we seem to have clear skies and I can see the water from my apartment. Sky is blue, winds have abated and the buildings are in somewhat sharper relief against the sky. The two 3-sided towers which are almost exact replicas, with one abit shorter, are the Alfardan Towers, the taller is the residential building where I live; the slightly shorter is commerical space. 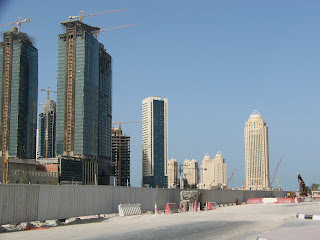 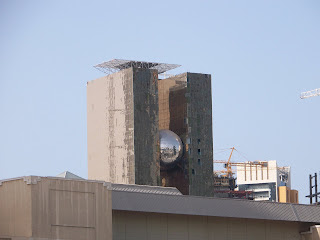 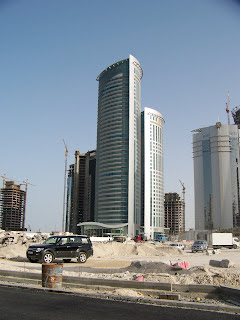 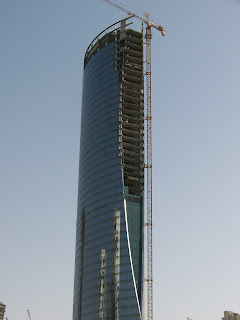 Meanwhile the northeast U.S. has been suffering under a late summer-like heat wave (just abated today I hear) and the mid-west U.S. has heavy rains and flooding. I am looking forward to my upcoming trip to the U.S. where I will walk outside for more than 100 meters, in fact, with great delight, walk across Central Park to meet two very close friends, who share the same birthday, for lunch at the Museum. A tradition we began two years ago and will need to continue.

I close with a photo of my living room looking across a vase carved from Egyptian marble to the streets outside. Not visible in this photo, but in direct line of sight across the vase, is the reverse side of the building with the image of an Olympic sharpshooter. And a close-up of the building in which I live. 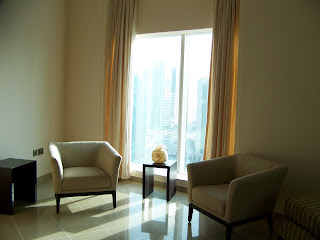 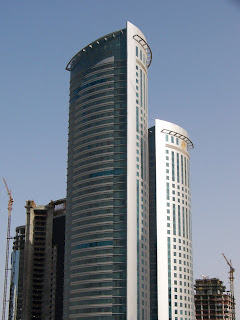