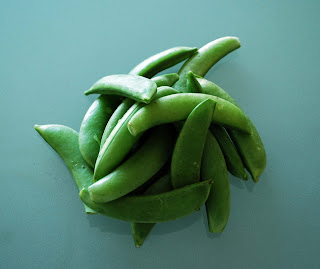 Here in Qatar I recently found sugar snap peas, clearly imported. Although I am distinctly not a legume eater, I learned long ago that snap peas and green peas are two very diferent plants with very different taste and texture sensations. I’ve been eating them for a few weeks and will continue to as long as they are available. Eaten as snacks they are great, chopped and added to tuna fish salad a very nice replacement for celery. They take me back well over twenty years to a 1000-acre mid-19th c. farm on the R.I. Connecticut border where I was fortunate to spend many week-ends over the course of three + years. For a couple summers I planted and farmed a good-sized vegetable garden. One summer, after excavating original front walkway stones, I started an herb garden in the shelter of the front door. But the snap peas belong in the garden.

For the vegetable garden, I planted the vegetables we liked to eat and knew would grow: tomatoes, corn, snap peas, zucchini (for the flowers), basil etc. I had learned to love fiore di zucchini when excavating in Southern Italy. Dipped in a light flour, egg and spice mix and then quickly fried they are very tasty even if, despite some Italian beliefs, they are not aphrodisiacs. (I offer a piece on summer squash flowers - the link in the title if you are interested.) The two horses on the farm were allowed free range of the grounds after haying so we clearly needed to safeguard the garden and did so with electrical fencing. It worked well until one evening when one of us forgot to turn the fence back on after weeding and watering. The next morning we found that the garden had been decimated and the horses almost seemed to be groaning from vegetables consumed: all the corn and my second crop of snap peas, tomatoes, zucchini and indeed everything edible. If sentient beings they’d have thought they died and gone to heaven. It was the snap peas I missed the most. And now I have them here in Qatar and they take me back to kind thoughts of the horses and the garden.
Posted by Susan at 10:19 AM 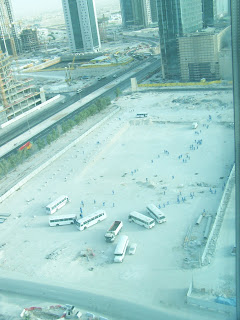 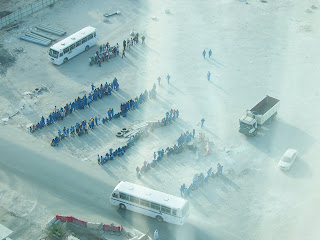 Lunch time conversation recently included our fairly passionate debate over concerns about Qatar treatment of the many ex-pat workers. Not professional level, but the workers who dig the roads, build the buildings and clean the highways. The poor images displayed here were taken from inside my apartment through dirty windows but they do capture a bit of the scene each morning (well before 6:00 am) as busloads of workers are brought from their housing on the ourskirts of Doha. (When I return home in the evening hundreds are lined up, waiting to board buses.)

Friday (the first day of our week-end) is more and more becoming a declared family day in the malls – the only place to hang out – and this means no single men. I can get in; a single (or unaccompanied) man can get in by speaking what appears to be flawless English. The aim is to keep the thousands of Indian, Pakistani etc who work Saturday-Thursday out of the malls where they stand and stare. Are they doing so, we ask, because they are deprived of the female sex (the belief it appears of the Qatari) or because (my partial explanation) they are bored and men do stare at women? In any event, we now have these new rules and some of us chaff at them as SO discriminatory.
Our conversation also included the plans to build special ‘parks’ for these laborers thereby further segregating them but giving them some space of their own. Colleagues of mine, Asian in origin, have been treated as if they are day laborers and the discrimination here bothers this community of academics. A fellow institution took a group of mostly local students to see the workers’ housing and they were appalled. More spreading of information and knowledge of the true conditions will help. Which leads to my topic here:
This week’s papers announce the beginning of the academic year in various articles. There is a piece on the inaugural class of students in two programs at Northwestern University’s Education City campus (journalism and communication programs). And so it seems, as I read local news, just in time. The inauguration of a program in journalism offers the possibility that students may be introduced to investigative journalism, exploring further the study of the Qatari treatment of imported locals working at jobs the Qatari don’t want (construction, retail sales etc) and living in conditions they can’t imagine. There is also hope (on my part at least) that the reporting in the local news will reach a level above street language, as a story in the same paper shows and from which I quote here(bold highlights mine). From The Peninsula, August 18, 2008:

"Two conmen who had been posing as police officers and intimidating people into giving them money have been convicted on two separate charges. Both are youngsters barely out of school.
In the first instance, the two, who were in a car, stopped a pedestrian and told him to get in their vehicle saying they needed to verify his identity. The pedestrian was carrying a laptop, a camera and an expensive mobile phone. The duo then asked him to prove that the valuables belonged to him.
They kept his identity card, ATM and credit cards along with the valuables. The ‘policemen’ then asked to see his passport. As he was not carrying it, he took them to his house. Once they reached there, he entered his home only to find they had pulled a vanishing act. He also discovered that they had used his ATM card to withdraw QR11,000.
In the second case, the swindlers stopped a man near his house late in the night. He was asked to produce his ID and wallet for a routine check. This victim, too, was asked to show his passport. Again, the two disappeared as soon as the man entered his home. He found out later the conmen had used his ATM card to purchase a number of items from six different shops.
However, the culprits soon ran out of luck. The victim one day happened to see the pair in another part of the town in their car.
This time, he noted the car's registration number and tipped off the real police along with a vivid description of the two. The police soon arrested the con artists.
So upset was the doting mother of one of the criminals to learn about his involvement in the heinous crimes, she lost her eyesight.
The Lower Court sentenced the two to six years’ imprisonment. However, the sentence was later reduced to one year on account of their young age. "

Maybe I have spent too long reading the New York Times ...
Posted by Susan at 12:32 PM 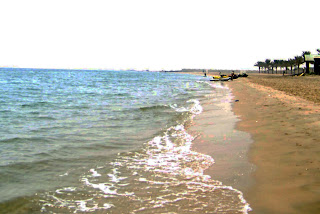 Following my recent discussion of climate change, I was interested to read the very recent news about dead fish floating off the coasts of Qatar. With water temperatures reacing 39 degrees celsius (over 102 degrees farenheit), fish and other species are dying. As the article relates, not only are rare sea turtles in danger but the coral reefs as well and 20 species of fish have disappeared.

Troubled waters: Dead fish floating at sea
Web posted at: 8/8/2008 3:15:20
Source ::: The Peninsula / By Satish Kanady
Doha • A large number of dead fish have been seen floating in the sea off Qatar. A group of fishermen who returned after their catch to Shamaal on Monday said they saw a vast quantity of dead fish floating about 45km off the coast. The high temperature of sea water is believed to have caused the mass death of fish.
"This is a common occurrence in the deep seas during peak summer. The death of fish is due to the extreme temperature of sea water", a boat operator told The Peninsula. Cheri and the popular Hamour, among other species, were seen among the dead fishes, he said.
The sea water off Qatar's coast yesterday registered a temperature of 39 degrees Celsius, the highest in recent years.
Qatar's coastal areas were littered with dead fish and invertebrates during the summer of 2006 after the sea water reached a temperature of 37 degrees Celsius. Large quantities of fish and endangered sea turtles were washed up on the shores at Al Khor, Mesaieed, Al Messeilah, Um Alhoul, Al Wakra, Ras Abu Fontas, Doha, Al Marunah and Al Jassayiah for five days.
The Meteorological office yesterday said the sea water off Qatar has been recording a high temperature of 38-39 degrees Celsius for the past few days.
Experts say high temperature of sea water is a potential cause for the death of fish. This may happen during peak summer, when the water temperature exceeds the tolerance range of fish.
Water temperature may affect fish and invertebrates in two ways. The metabolic activity of fish (oxygen consumption) increases with the temperature of the water. But at the same time, increasing temperatures reduce the amount of soluble oxygen in the water, they say.
Qatar's coastal marine belt is already under severe pressure. Studies have shown that the salinity and temperature of the sea water here are the highest in the Middle East. While the average salinity in the Middle East is 40 ppm (parts per million), the figure is 55 ppm in Qatar, as against the global average of 35 ppm.
Recent studies have also shown that more than 20 species of fish have disappeared from Qatar's territorial waters. That rising temperature of the sea water is also posing a serious threat to the country's unique coral deposits. Qatar's coastal marine areas are home to many ecologically sensitive species, including sea turtles. Of the eight species of sea turtles found across the world, four are found in the sea off Qatar.
Posted by Susan at 3:44 AM