Despite the news that discusses global economy, global warming and U.S. politics, I am routinely reminded that I am not in Kansas anymore, as Dorothy so famously proclaimed. Two recent news stories demonstrate this point. In the first, we see the interest in Doha in having a spiderman scale buildings, specifically a local hotel - in the NY Times I have read on numerous occasions about the arrest of those who scale tall buildings. In the second I post a note on the front page today about local weather.

DOHA: Alain Robert, “French Spiderman”, will be scaling the La Cigale Hotel building in Doha on December 6 and 7.
Famous for scaling skyscrapers, Robert has climbed 85 giant structures around the globe, most of which he has scaled using only his bare hands and climbing shoes.
His second time in Doha, Robert will be climbing the building sans safety net.
“The management invited Robert to climb the building on December 6 because maybe, it’s not finalised yet, but maybe, we’re going to formally open our hotel by then and his presence would be interesting to the guests as well as the people in Doha,” a hotel employee said.

Yet from the NYT we read
December 2, 2008
NEW YORK REGION
Times Building Climber Is Sentenced to Three Days of Community Service
By JOHN ELIGON (NYT)
The first man to climb the facade of The New York Times Building last summer pleaded guilty to disorderly conduct and will pay also pay a $250 fine.

Invitation v jail ? such is the difference.

DOHA: Qatar received scattered rainfall across the country yesterday, and the weatherman has forecast chances of more showers today.
The Met department officials termed yesterday’s rains as “scattered but almost all across the country”.
The daily weather chart forecast “partly cloudy to cloudy weather with a chance of scattered rain today.” The weather report also forecast relatively cold weather.
Early yesterday morning, Doha received light scattered rain. Ruwais, Dukhan, Al Khor, Abu Samra and Mesaieed also witnessed light drizzles. Doha witnessed very light rain in the noon that lasted just a few minutes.
The weatherman forecast a maximum temperature of 27 degrees Celsius and minimum of 19 degrees today. The easterly to southeasterly wind is expected to blow at a speed of six to 14 knots inshore and eight to 17 knots offshore. Winds are expected to whip up waves.

This translates to temperatures of 66 - 81 degrees farenheit. Yesterday as I left to get groceries it started to sprinkle - what seemed to come down was muddy wet - and my car was streaked with mud spots. Oddly enough my car spun out on the little wet there was. The image below is of a rare tornado a few weeks ago in the northern area. Weather rarely lingers - in N.E. it is said if you don't like the weather than you should wait a few minutes - even more true here. In the afternoon a friend called to ask what my weather was - she had some rain, I had none. 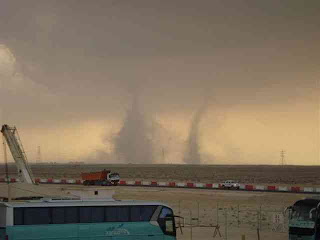 After weeks of collectively holding our breaths, here there and everywhere we can finally start to breathe again.

The night before the election I received a call from a very dear friend, an African-American with whom I helped start an exchange program between Togo and her (my former) University and with whom for almost 20 years I travelled the LIRR to work each day. We spoke of our optimistic but still cautious thoughts. I awoke at 3:30 am on 'election' day, looked at the computer news and went back to sleep - much too early to know anything. By the time I left for work at 6:25 things were trending our way. A good friend and colleague's husband called me as I pulled out into traffic to say we were almost there but he wished he were in NYC. 30 minutes later she called after I had reached the office but before I got the computer up to report in tears that we won. He's an Egyptian-born American lawyer, she's Greek-born American research administrator. They have two sons, 7 and 10.

The Director of Finance wore a blue suit, the color of the blue maps and Obama's placards, specifically chosen; she's Asian-American, born in Thailand, once married to an Indian and the mother of two early twenties children.

I mention these facts because I expect many were also a bit jolted by McCain's comment to Obama, that it was a great day for African-Americans. He still doesn't get it. Of course it is an incredible day for African-Americans and one that few of us expected could come so fast. But it is also a great day for recent immigrants who continue to make the U.S. what it is and most importantly, it is a great day for all Americans who have watched in despair as our country and its reputation around the world were hijacked by a gang of neo-con thugs who walked over our civil liberties and the constitution in a way that may take quite a while to heal. So when I heard McCain's comments I thought again of what a disaster we just avoided.

After sending am email on this, I received responses concurring with these thoughts as well as this story from one colleague: “I overheard a conversation today in the small town where I work (it's the county seat and much bigger than the smaller town I live in) about how ‘we're the minority now - they have the power now. Did you see those young Obama kids drinking their beer? Is that what we want this country to be?’ etc, etc with ruminations about moving to Australia or the Middle East (although the woman said she didn't think she'd make it in the Middle East because she says what she thinks).” And these folks haven’t a clue…. To attempt to escape what is in the USA by going to the mid-east is as misguided as trying to put Palin in as VP or lipstick on a pig.

The papers are full of what American living around the world felt and how they reacted to the news, many getting up early to witness the decision. Since I am in Qatar I share brief pieces from the local paper here.
Saudi businessman Ali Al Harithi hailed US democracy, which brought a man with a Muslim father to the White House. "This confirms that the United States and its people are not racist. The American people chose Obama, who is African (by origin) and whose father is Muslim, to voice rejection of policies of the conservatives in the outgoing administration," he said. "It also sends a message to (Islamic) fundamentalists in the Arab and Muslim worlds that our clash with America has no racial or religious dimensions," Harithi added. Read the full story at
http://www.thepeninsulaqatar.com/Display_news.asp?section=World_News&month=November2008&file=World_News2008110634438.xml

Doha-based American and a social activist Karen Al Kharouf candidly said, "I am a Republican, but I have voted for Obama because I believe he is capable of bringing the change that he had promised to the world. I am proud to see an African-American becoming the president of the US, for the first time in its history. This is a moment of joy for all the African-Americans who had gone through long periods of oppression and discrimination. …
Intellectuals and social activist were not the only ones keenly following this US presidential elections. Mahmood Alam, 34, who manages Khaleeji 11 Modern Laundry in Najma, asked, "Did Obama win? He will be the first black to occupy the hot seat, is this correct, sir?"
Read the full story at
http://www.thepeninsulaqatar.com/Display_news.asp?
section=Local_News&subsection=Qatar+News&month=November2008&file=Local_News2008110633442.xml
Posted by Susan at 7:06 AM