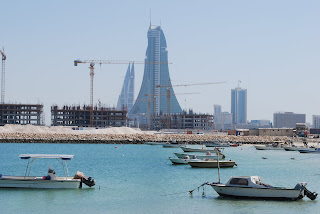 Bahrain, an archipelago in the northern Arabian Gulf and located in the Gulf south east of Saudia Arabia and northwest of Qatar, has long held an important position as a trade center linking Europe and the middle East and the India subcontinent.

Long established as a center for pearls, these are less and less a serious commercial enterprise. The round-about monument pictured here remains a testimony to this long heritage. I show as well two sells, one polished with a pearl added, purchased at a local shop. The other, rough and found in the sand on the site of Saar. 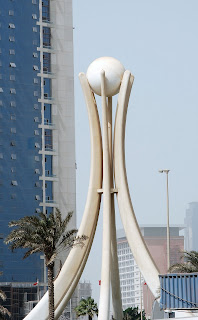 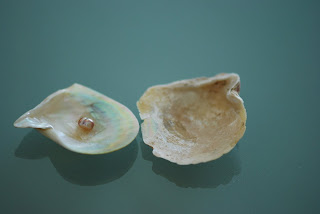 Oil too is dwindling and Bahrain has turned to tourists as a source of continuing income. A major ‘city’ under construction by international firms, Bahrain Bay, typifies how they are approaching the future. From a column by Daniel Altman a year ago (http://blogs.iht.com/tribtalk/business/globalization/), we read of this development: "What’s amazing is just how much the Bahrain Bay developers have outsourced. Even zoning and planning approvals for the new city - something usually left to government agencies and elected commissions in wealthy countries - will be in the hands of foreigners, in this case the architecture firm. So, I ask, will this city be truly Bahraini when it’s finally finished? Does it matter, especially if its clientele and residents will also be international?" In many ways these questions unlie much of the development in the Gulf today.

Bahrain, far smaller than Qatar, has far more to offer: forts, archaeological sites, an excellent museum, many shopping venues including the Gold Souk, much entertainment and excellent restaurants. For wildlife enthusiasts, there are migrating shorebirds on the eastern shores and a wildlife park.

Bahrain was known in ancient times as Dilmun and has long been associated with the garden of Eden and the Epic of Gilgamesh. Unlike Qatar, Bahrain has oasis-like areas in the north and west, relying on subterranean aquifers that draw fresh water from the even larger underground aquifers of Saudia Arabia. It is of course its connection with Dilmun (flourishing from 3200-1600 b.c.) and sites and thousands of graves and burial mounds that extend over 18miles that is fascinating to me. There are estimates of 170,000 graves that, despite being stripped by looters over time, have still yielded arms and jewels and bronze and copper objects whose content is the same as that used in Magan in the Ultanate of Oman in the 3rd millennium b.c. Seals bearing inscriptions tell of everyday life of the merchants over 4000 years ago. All the finds confirm that trade as early as the end of the 4th millennium b.c. existed between Mesopotamia, Dilmun, Magan, and the capital cities of the Indus Valley. Even today, vessels that leave the mouth of the Tigris and Euphrates stop here to get fresh supplies of sweet water and vegetables. Cuneiform texts indicate that Dilmun was two-sailing days from Mesopotamia. The Dilmun empire may well have extended as far as Arabia and Iran, as archaeologists and geographers who have cross-checked all findings suggest. One ancient table ca 3100 b.c. describes Dilmun as Elysium where inhabitants were eternally young and “where the raven did not croak and wolves and lions did not devour their prey.”

Much of this passage has been drawn from two web sites, one on wildlife and the second from The Washington Times. For a recent archaeological report see The Early Dilmun Settlement at Saar, by Robert Killick & Jane Moon, 2005 and reviewed in the journal Antiquity.

I visited Bahrain over Eid ul-Fitr, a holiday celebrating the end of the fasting of Ramadan. Although many sites were closed, I had a fine few days traveling the country, shopping and visiting Saar, two photos of which are shown here. 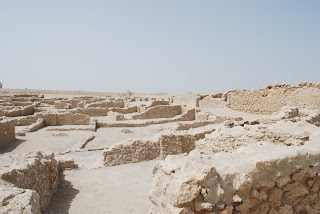 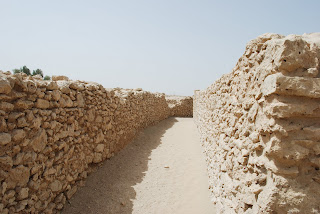 I also drove the causeway to Saudia Arabia, stopping of course mid-point, where I took some photos and then returned to Bahrain. The 26 km causeway allows many people the opportunity, with appropriate visas, to drive from Bahrain to Qatar and vice versa by passing through Saudia Arabia. Although a colleague of mine does this with her husband, of course, I could not since women aren’t allowed to drive in KSA. They plan a bridge from Qatar to Bahrain but that is still at least a decade away. 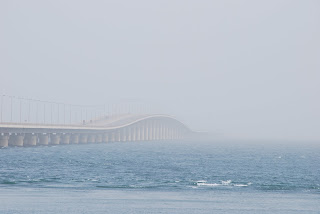 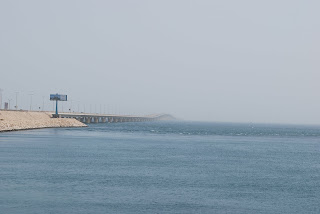 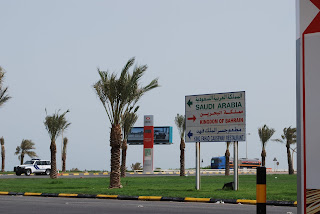