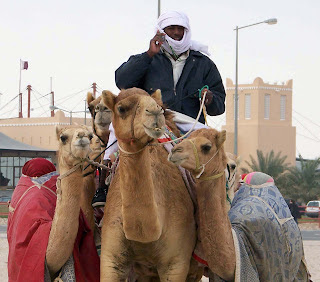 Part of my excursion last week was to the camel race track at Al Shahaniyah. This image of a camel handler controlling four camels and a cellphone vividly demonstrates the antiquity and the modernity. From the government web site on camel races,

Camel race is an exciting sport, for which Qataris have exceptionally high regard and appreciation. It stands for originality, most esteemed heritage, honorable, competitiveness, excitement and speed. In light of that and in recognition of the importance of the practice, H.H the Emir and H.H the Heir Apparent issued the directives to hold camel races on annual basis. By encouraging this sport, they also sought to highlight the popular heritage, conserve the authentic Arabic traditions and remind the youths of the era of glory and the sport of forefathers. …The Camel Race Committee is responsible for supervising the camel races. There are two breeds of camels in Qatar; one is the Qatari and the Omani and the other is the Sudanese. Sudanese camels have come directly from the Sudan across Saudi Arabia. They are characterized by their speed and agility while the Arabian breeds are characterized by their strength and endurance. Fast camels are useless without a skilful trainer. …The first ever camel racetrack to have been built in Qatar is the one at Al Abgah, which was established according to the directives of H.H the Emir. Races continued to be held at this 16-km long track until late 1989, when the number of entries to the race increased beyond its capacity and when H.H the Emir ordered the establishment of the present camel racetrack at Al Shahaniyah. Races on Al Shahaniyah track started in 1990 with all 6, 8 and 10-km race categories. The auditorium has a main terrace, a veterinary clinic, modern stalls for camels, a big mosque and large water tanks.

What follows are portraits, of camels and of camel handlers. The camels are very interesting as our retiring Dean of Medical Education explained. Their hare lip (seen in the portraits) is critical for eating and in fact the two sides are used as our fingers are. The narrow eyes, also seen, are critical for closing during sand storms. Seen readily on the image is the fifth foot, on the sternum. For years, this hard patch was believed to have been caused by the action of camels resting on their chest. In fact, as our expert revealed, when he dissected a camel embryo, he saw the same structure and realized that it didn’t develop during life but was there from the beginning. 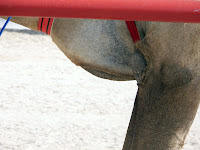 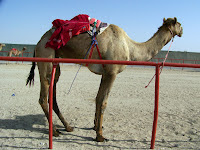 First the camels, together and alone: 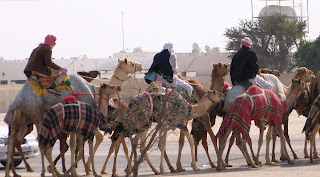 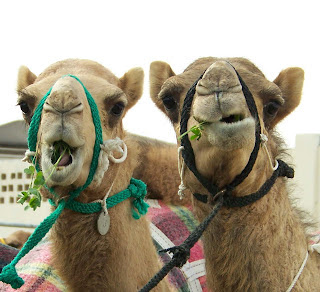 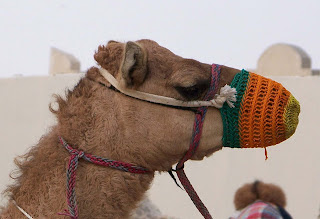 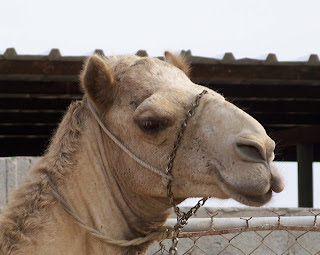 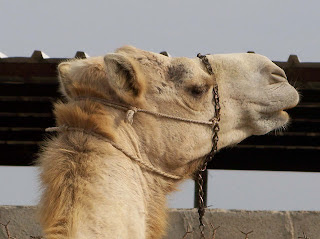 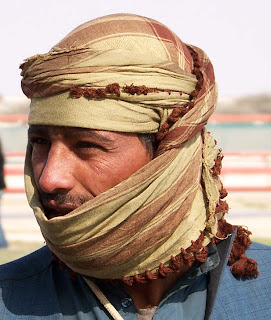 Then the camel handlers: 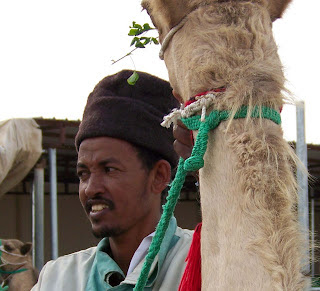 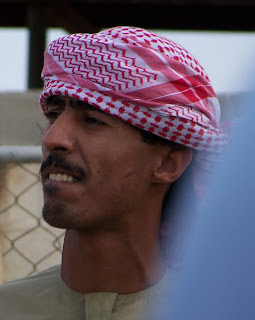 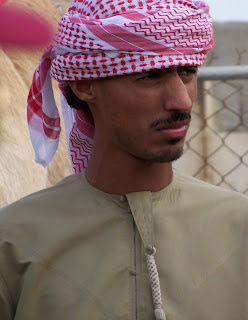 In the last few weeks billboard ads have sprung up on the streets of Doha in both Arabic and English (separate ads per lanauage keeping the ad very simple for ease in reading as the cars speed by) announcing the availability Feb. 1 of Krispy Kreme donuts . The ads feature adults in traditional garb and children. Needless to say, none is overweight. From the ArabianBusiness of March 2007 we read that

rican doughnut giant Krispy Kreme is set to open its first UAE outlet in Dubai tomorrow (March 16), adding to concerns over the region's mounting obesity crisis. ... Currently the UAE holds the highest obesity rates in the world - higher than the United States - because of easy access to high calorie foods and a sedentary lifestyle. One in five adults in the region also suffers from one of the many obesity-related illnesses, diabetes. ... The Krispy Kreme franchise move comes as the UAE works on strategies to combat mounting levels of obesity in the region. In the United Arab Emirates, 74% of women are obese or overweight according to a 2005 report by the International Obesity Task Force, a London-based think tank. In Lebanon the figure is 75% and in Bahrain, 83%.

From another blog we read
I was in Villagio with my friend last week and she couldn't stop talking about Krispy Kreme when she found out that it's going to open soon. I guess it must be that good. But the thing is how much would one piece of the famous Krispy Kreme cost. Dunkin Donuts is expensive enough and how much more the Krispy Kreme that everyone seems to be raving about. Well in any case Tian and I love to give it a go and find out for ourselves.I even heard that they have a promo on the opening day, the first 25 customers will get a free box of doughnuts every week for one whole year! I just don't know if we're that crazy enough to really be waiting there at the food court of Villagio Mall hours before the opening to be able to win the promo. But who knows, hahaha...
The ads for Krispy Kreme are almost as plentiful as the flags championing the 2016 Olympic Games whose fate will be decided in fall 2009. By then how many Qataris will have raised their weight and sugar levels to dangerous levels.
On another note, I get a wonderful TV package here which brings me Meet the Press live on Sundays (5:00 p.m. my time, 9:00 am eastern time) and then George Stephanopoulos one hour delayed. Wonderful TV for this primary season. Aftr these shows, I clicked around the dial last Sunday and got an old Law and Order: bizarre. Fred Thompson as the lawyer standing beside Bloomberg (or an excellent lookalike although I think he gave a cameo performance) discussing a case of an Iraqi woman married to an American, she accused of the murder of a former Abu Ghraib attendant in New Jersey. All with Arabic subtitles. I felt as if I were in the twilight zone. U.S. politics mingles with some form of fiction, but is it really any different than the political events? Last night I watched another Law and Order which featured post-traumatic stress syndrome from 9/11 as a defense against murder - subtitles again in Arabic ...
Posted by Susan at 8:56 AM 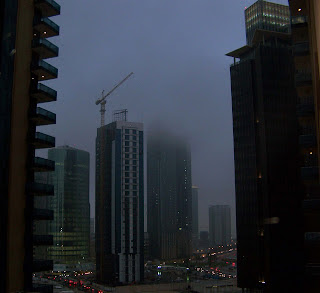 Winter rains have been with us for the last few days – quite heavy today, flooding roadways, collapsing road edges not designed for rain, filling deep holes but appearing as shallow puddles. The inside lane of the round-about tends to be treacherously deep. Pumps are positioned by the sides of some roads to lower the depth of the collected water and traffic jams up the highways. Despite this some large SUVs insist on travelling as if there were no treacherous conditions. The rear view from my balcony shows the threatening skies around 5:00 pm and the lights of the traffic, heavily backed up as the cars attempted to bypass choked up roads in front of the City Center and only succeeded in attempting to join the queue half way up the road.

Visitors to the Gulf States this week included President Bush who stopped in Bahrain and then hopped over to the UAE skipping Qatar. As an editorial in the Online Peninsula indicates “US President George W Bush is likely to return home empty-handed at the end of his marathon tour of the Middle East. Despite his repeated calls for peace between Israelis and Palestinians by year end, the prospects to end the decades-old conflict seem bleak. He used his visit to the region to hold high-level talks with the leaders of Israel, Palestine Authority and some heads of states in the Gulf. … It was also surprising to note that Bush did not elaborate much on troop cuts in Iraq this year or about the ongoing insurgency in Baghdad or the tensions at the Iraq-Turkey border over the Kurdish issues. … He indeed was up to something else, something really serious that concerns America. The real cat was out of the bag during the Kuwait leg of Bush’s tour when the US president embarked on a vigorous campaign to rally the oil-rich Gulf states around America against Iran.”
The U.S. President’s absence in Qatar was made up by President Sarkozy, however, as the local paper, the Online Peninsula, reported today, who “tomorrow starts a three-nation tour of Gulf states eager to take up his offer to share France's expertise in civilian nuclear technology with the Islamic world. On his first trip to the region since taking office in May, he will visit Saudi Arabia, Qatar and the UAE, three states interested in developing a civilian nuclear programme despite their oil and gas wealth.”
It is ironic that as Bush attempts to rally Gulf States against Iran and its nuclear building program, France is in town offering expertise in building civilian nuclear programs. "The sharing of civilian nuclear (technology) will be one of the foundations of a pact of confidence which the West must forge with the Islamic world," Sarkozy said after signing the agreement with Algeria last month. Amid concerns over Iran's nuclear ambitions and growing regional clout, the six Arab monarchies of the Gulf decided in December 2006 to develop a joint nuclear technology programme for peaceful uses. The UAE's energy undersecretary, Ali bin Abdullah Al Owais, has said the Gulf states aim to have a joint nuclear reactor by 2025. But in parallel with the joint plan, "each country can do whatever they wish" and pursue its own nuclear activities as a means to ensure the future of its industries, another Emirati official said, requesting anonymity. "I don't think there is any contradiction. ... Although the UAE will be the only country on Sarkozy's tour to sign a nuclear-related deal, nuclear energy cooperation is also likely to come up during his talks in Riyadh and Doha, where the idea is at an earlier stage."
Posted by Susan at 11:18 AM