This morning was slightly hazy but shortly after lunch the wind picked up and the sands blew in. I thought it would be interesting to compare photos from this afternoon, ca. 3-4 pm, with similar shots on much clearer days. The view across the bay from before was earlier morning in December with a slight fog. Today's pictures could be assumed to be simply bad photography but in fact they are due entirely to the weather - same camera, same photographer.... you can imagine the dust on the balcony and slipping through the balcony doors to the apartment. 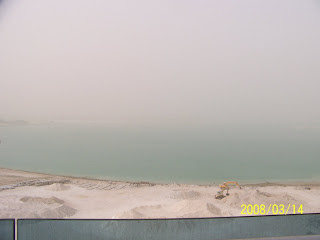 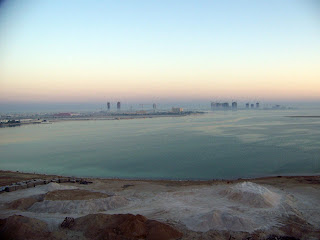 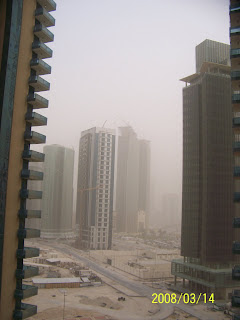 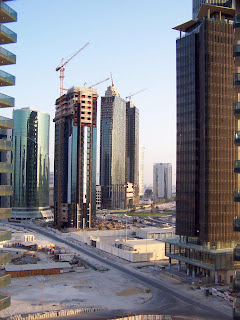 Current events and the price of oil

After posting this blog, I see an interesting related item inthe New York Times. It reinforces the sense that the U.S. just does't get it and I have added it below.

As always it is interesting to see Middle East current events from the perspective of being here. I was struck recently, for example, of the U.S. concerns regarding Ahmadinejad’s visit to Iraq. While it is very natural from this part of the world, and in fact, Ahmadinejad visited here in Qatar, the U.S. finds it, to say the least, not in good taste. Yet from the Gulf perspective where all these countries are allied in one fashion or another it is natural. This alliance despite the fact that the Gulf Cooperative Community (GCC) was formed specifically because of concerns about Iran in the early 1980s.
Recently the New York Times editorial spoke of necessary negotiations in this part of the world, specifically citing three countries, one of which I live in currently. It is at least a measure of Qatar’s growth that it is mentioned in peacekeeping efforts alongside Egypt and Saudi Arabia. I quote briefly

If there is any hope of salvaging the effort, the United States, Europe and Arab states must move quickly to arrange a cease-fire between Israel and Hamas and give serious thought to a new strategy for dealing with Gaza.
Arab nations — especially Egypt, Saudi Arabia and Qatar — must help the Palestinian president, Mahmoud Abbas, pressure Hamas into halting rocket attacks against Israel.

From this week-end’s local papers we see some other interesting current events, for example, the Gulf States approach to oil:

Gulf States are becoming more pragmatic in their oil policy, increasingly basing it on market fundamentals rather than seeking to appease their Western allies, analysts said yesterday.
Saudi Arabia, the world's biggest oil exporter, the United Arab Emirates, Kuwait and Qatar on Wednesday joined other OPEC members in deciding to maintain their crude output, drawing strong criticism from the White House.
"He (President George W Bush) would have liked OPEC to have made a different decision. He is disappointed that they decided not to increase production," White House spokeswoman Dana Perino said. Bush "does not think it's a good idea for their biggest customers, such as the United States, to have an economic slowdown, in part because of high gas prices," she said. …
Kuwaiti oil analyst Kamel Al Harami said he believed that Gulf States were no longer capable of convincing their OPEC partners of something that is not supported by market data.
"The US is not willing to read market figures correctly. US fuel stocks, for example, have reached their highest level in 14 years and US inventories have risen for six consecutive weeks," Harami said. …
"The Gulf OPEC members' approval of the cartel's decision was not a snub to Bush's call. It was a decision totally supported by fundamentals and facts," Harami said.

Cheney also will meet with Saudi King Abdullah at a time when oil prices are hitting record highs of above $108 a barrel.
He was expected to reinforce the message from Bush, who had urged OPEC to increase production during his visit to Saudi Arabia in January. The Organization of the Petroleum Exporting Countries decided not to boost output.
"Obviously we want to see an increase in production," White House spokeswoman Dana Perino said. "Our message remains the same."

It does make you wonder who is reading what ...

Another sense of Qatar’s globally developing life is the recent announcement, even in my backyard, of the planned presence of a shopping street in Education City, a site in which 8 American colleges have branch campuses. And lest you think that this is an easy step forward, read briefly about Sheikh Majad’s struggle.


Villa Moda, the well-known Kuwaiti luxury fashion brand is planning to set up the first “indoor shopping street” in the Education City in collaboration with Qatar Foundation. This was disclosed by Sheikh Majed Al Sabah, a member of the Kuwaiti royal family and creator of Villa Moda, at Tasmeem Doha 2008.
Once established, the “shopping street” would be the first such facility in the Education City. The facility to be named “UR Street” will introduce a new concept of indoor street shopping in Qatar, claimed Sheikh Majed.
The shopping street will be set up at a 270 meter area, which will also have two multi-storeyed buildings, with shops on both sides selling various luxury lifestyle products. The facility has been designed by Philippe Starck, an internationally-renowned French designer. Sheikh Majed, however, didn’t give any time frame for opening of the facility.
He said Villa Moda is also preparing to launch its second outlet in Doha at the Villagio Mall, which is expected to be opened in three or four months. The first Villa Moda store was set up at the Ritz-Carlton Doha.
Sheikh Majed, nephew of the late Emir of Kuwait, Sheikh Jaber Al Ahmad Al Jaber Al Sabah, launched the first Villa Moda store in Kuwait in 2002. The company, dealing in a wide range of high-end fashion products, has now grown in to an international brand with outlets in Dubai, Doha, Damascus and Bahrain, and a London store in the pipeline.
It was a long and hard struggle for Sheikh Majed to create a niche as a luxury fashion retailer, a field which was not considered ideal for a member of the royal family. “Ours is the only Middle Eastern luxury lifestyle brand with an international reach,’ said Sheikh Majed. An innovative mix of regional and global concepts and standards made the venture a huge success, he added.
Posted by Susan at 10:35 AM