Not Kansas for sure

While there are fast food restaurants and plenty of western items for purchase, every once in while it is good to remember that we are, so to speak, not in Kansas any more. An article in today's Gulf Times available through the title link in its entirety offers just such a wake-up call. The article discusses four court cases and I select from two here, italics mine.


A Doha court has sentenced four men and an Arab woman to a three-month imprisonment and imposed a fine of QR6,000 for their involvement in a scuffle in the bar of a hotel and for disturbing public order under the influence of liquor.  ...  A policewoman said that “she did not smell liquor from the female suspect” but the court ruled that such a statement was not enough to say that the woman, identified as a Tunisian, was not drunk.  A medical test found no liquor in the local’s blood, but the court said that it was not committed to that result, adopting the testimony of a policeman who said that all the five suspects were “behaving abnormally.”

A Doha court sentenced in absentia an Asian man, to a month imprisonment and QR3,000 for “sending four mobile text messages containing indecent words to an Arab woman.”  The woman’s husband filed a police case in June last year saying that his wife received the filthy text messages, in Arabic, from unknown local number.  Investigations led to the 44-year-old Indian accused as he was the owner of the number from which the messages were sent. He said that his boss used his phone before leaving the country for good, but the court dismissed his “baseless” claim saying that it was a way to escape from punishment.  However, the court said that it was utilising its authority to change the accusation “in order to stop the suspect from escaping punishment.”  The court charged him with “disturbing others, through telecommunication means, by using indecent words.”

When I arrived in this country in 2007 the daily high commuter traffic was quite dangerous with roundabouts carrying traffic well beyond capacity and cars, trucks and buses competing to be in and through the round-about before the others. Shortly after I arrived, traffic cops were stationed at the most heavily trafficked roundabouts to stop traffic from individual directions and attempt to keep a semblance of free movement. The next step was the addition of traffic signals again at the most heavily trafficked roundabouts. Here the red signals stop, the green go and the flashing yellow, what I term, ‘proceed if you dare.’ On a green light you must make certain that that no one is cutting across you from the left, moving legally on a yellow flashing. Yet this is a much better system.

Also in 2007 some new safety signs, in both Arabic and English, began to appear at major intersections and roundabouts. As the Qatar Visitor reported at the time

New traffic signs have sprung up around Doha in the last few weeks, warning of the dire consequences of breaking the strict new traffic laws.

They illustrated some of the informative signs: 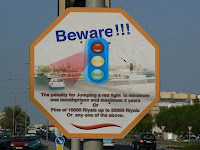 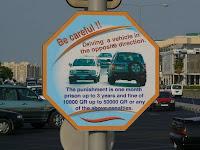 Other signs today range from the very benign (a picture of a smiling young girl, ‘Keep your family safe’) to the slightly more menacing (another smiling girl, this time with the admonition, ‘don’t lose your child’s smile by accident) to the downright menacing (a crumbled car and blood dripping from a stop sign). The latter two I illustrate here; the English version of the dripping blood sign reads 'Take Care, Follow the Traffic signs to be safe.' I no longer see the one with a chalk outline of a body on the pavement. 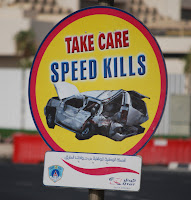 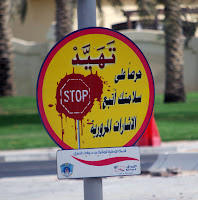 Traffic is far better now although there are still far too frequent acts of challenge and high speeds when in heavy traffic. Still continuing is the late night practice of drag racing along the highways out of town. A few months ago a prominent, highly talented young Qatari was killed when inadvertently caught in such a ‘race.’ He was the recently named Minister of Business and Trade. The language from the recent trial describes the race and needs no further commentary. It appeared in the July 21 edition of Qatar newspaper The Peninsula.

Racing of two cars caused minister’s death: Witness
Web posted at: 7/21/2009 3:1:3
Source ::: QNA
DOHA: A witness deposing in a trial court confirmed that the car which hit the vehicle of the business and trade minister in May causing his death, was involved in a daredevil racing on Doha-Al Wakra highway. The witness was driving and coming in from the direction of the racing cars from Al Wakra, while the minister, H E Sheikh Fahad bin Jassem Al Thani, was coming from the opposite direction in his car and heading towards Al Wakra.

The witness told the court presided over by Judge Nasser bin Mohamed Al Dosri that when the two cars sped past his, their speed was so much ‘maddeningly high’ that his vehicle shook.

While one of the cars sped past his from the right, the other one on the left took to the service road in what looked like a ‘daredevil racing. “The two four-wheelers sped past my car in split second,” he said.

And soon the car on the service road approached the main highway, it kissed the other vehicle. This caused one of the cars to collide with the divider and cross over to the other side of the road. It first hit an electric pole and later the car of the minister which was coming in from the opposite direction, said the witness.

Life in the Gulf

No comment, except for the italics which are mine.

DOHA: Qatari women have reacted with disappointment at media reports saying that the first batch of 30 Saudi housemaids has begun work, entering an occupation which has been the domain of mostly Asian women in the oil-rich Gulf state.

According to newspaper reports, all the 30 Saudi women who have been roped in as domestic help, are aged between 20 and 45 years and none of them has a primary school certificate.
They earn salaries up to 1,500 riyals which is roughly equivalent to $400 per month, slightly more than what their Asian counterparts get. At least one newspaper quoted an official from a manpower agency saying that the 30 women have been selected after a series of interviews and intense training. And another 100 women have applied and are awaiting interviews, said another Saudi newspaper.

The manpower agency official said the demand in Saudi Arabia for local women to work as maids is going up sharply because of widespread fear in local communities that foreign women practice magic.

The Saudi Labor Ministry moved two years ago to allow local women to work as housemaids and they were to be officially known as ‘Saudi home arrangers’.

Reacting to the reports, Moza Al Malki, a prominent Qatari psychologist, told this newspaper yesterday: “It breaks my heart to know that Saudi women are venturing out to get involved in such a pursuit.”

“Imagine that this is happening at a time the GCC countries are witnessing immense economic prosperity and among these countries Saudi Arabia has the largest oil reserves.”

In principle, it is okay if a woman has to do a job as long as it is decent work and not in violation of Islamic tenets, she said.

“But in the end it is the job of a maid… The women will be exposed to all kinds of humiliation.” Al Malki said she hoped that the trend would be restricted to Saudi Arabia and not spill over to other GCC countries. Another Qatari woman who did not want to be identified said the development should be treated as an exception and she did not expect the trend to spill over to other GCC states.