Recently a colleague and I drove out to Zikreet, a place first documented on this blog on May 31, 2008 with the images of kitesurfing.

We went north of where I'd been before, stopping at an archaeological site of which I show a date press. It is possible to see how the date juice was collected and streamed through a trough to the holding area. 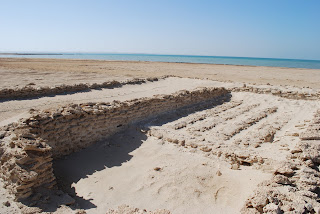 Further north we stopped at a Fort built a 15-20 years ago for a made for TV movie, reputedly called Son of Foxes or Son of Wolves. Just last week there was a piece posted on the web about this site, dated 2001. And now it is gone. 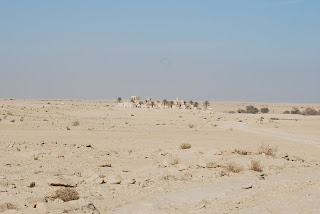 The fort is clearly new although apparently a very good copy of an original, once on the site. A caretaker family lives there and it is open to all. Again, a slideshow of images is available here. 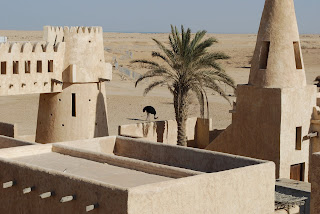 Among the images in the slide show is one of a tower, a traditional windtower with windows on all four sides that capture whatever breeze there may be and direct it down into the room below. These towers, known as 'barjeel' in Arabic, were used in the days before electricity as a primitive form of air conditioning. They function in the opposite way a chimney works, sucking fresh cool air into the house. There is an original such tower, Windtower House, standing within Doha that I hope to photograph soon. Apparently, it is no longer possible to enter it.

As always the dunes, soft talc rock carved by wind, are ever changing and fascinate me so once again I offer some for viewing here. 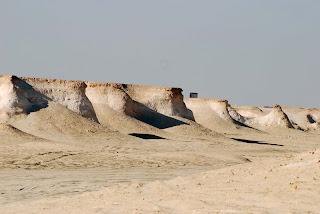 Ostriches, one seen in the image of the fort above, abound in the Qatar desert and while interesting to observe, they are dangerous to get too close too. They are the largest and heaviest living bird; females can weigh between 90 and 110 kg and they stand up to 2.75 m tall. Naturally their size and weight prevent them from actually taking off even though their wingspan can be close to 2 m. Not too long ago a British resident survived repeated attacks by a male ostriche. While everyone is cautioned against deliberately provoking ostriches, what is less known is how aggressive both the male and female can be during breeding season that begins in April. Ostriches have a history in the region spanning thousands of years, as demonstrated by rock carvings in Saudi Arabia of the Arabian ostriche. Today those found in Qatar are actually African ostriches reintroduced a few years ago after the Arabian Ostriche became extinct. Look at these birds from the safety of the slide show here.
Posted by Susan at 3:15 AM

Below are a few extracts from today's Peninsula that reveal a bit of the news in Qatar and the Gulf.

Qatar to help Sudan preserve historical sites
Web posted at: 2/20/2009 2:9:27
Source ::: The Peninsula
DOHA: Qatar is set to launch initiatives to support preservation and maintenance of historical sites in Sudan.

Sheikh Hassan said that the workshop will open new horizons to unify efforts and develop joint work between Qatar and Sudan in the field of archaeology and will achieve joint objectives. The visit aims to enhance cooperation between the two countries. Sudan has the most important and enormous archaeological heritage which is yet to be discovered as it will enrich the human heritage and connect the region’s cultures one to another. more

Qatari stocks plunge further
Web posted at: 2/20/2009 1:24:56
Source ::: THE PENINSULA
DOHA: Qatari stocks plunged further yesterday with the index of the bourse, the Doha Securities Market (DSM) shedding 66 points, or 1.33 per cent, to 4,869. The 20-share benchmark index slid below the psychological barrier of 5,000 points on Wednesday.

The index lost as much as 7.15 per cent, or a huge 375 points, over five straight trading days this week. The market remains closed on Fridays and Saturdays.

As on Wednesday, small Qatari investors were involved in heavy selling yesterday. They offloaded stocks worth QR116.79m, while the buying activity was to the tune of QR100.14m. Fears about the market not doing well over the days to come due to the global trend are eroding investor confidence, analysts said. more

DOHA: As a part of its continued efforts to reduce the millions of plastic bags that pollute the Qatar’s ecosystem every year, Carrefour, the region largest retailer will encourage to replace plastic bags at its checkout counters with reusable bags. Carrefour Qatar had already launched these bags in June 2007 as an alternative to plastic bags.

Carrefour, operated by Majid Al Futtaim Hypermarket, will make the “Eco bag” available in all its stores: a 31 litre reusable bag costing QR 0.50 and a 48 litre reusable bag worth QR 2.50. Both bags are recyclable and if damaged at any point, will be replaced at any Carrefour outlet free of charge for life. Carrefour will not make any profit from the sale of these bags.

The move is in line with Carrefour determination to eliminate the use of all plastic bags at its outlet. Carrefour’s use of reusable bags aims to reduce the pollution caused by plastic bags to the ecosystem. more...

Oman to build $1.8bn port at Duqm
Web posted at: 2/20/2009 23:57:8
Source ::: REUTERS
MUSCAT: Oman will build a OR692m ($1.8bn) port at Duqm as part of its economic development plan despite a global downturn and a projected drop in oil revenue, Minister of National Economy Ahmed Mekki said yesterday.

The government expects “reasonable growth” for 2009 despite the financial crunch in part because it aims to pursue all the major state-led development projects it has launched, using surplus oil revenue or state reserves, if needed, he said.

“The 2009 outlook is relatively good ... we expect a reasonable growth since we are going ahead with all major plans,” Mekki said.

Oman plans to diversify its economy away from oil income dependency, which makes up about 75 percent of national revenue, and is pursuing a number of large-scale infrastructure projects. more ...
Posted by Susan at 8:28 AM

Last evening, hoping to catch the light at the end of the day and try out my new lens in capturing the Museum from across the bay, I went directly to the Corniche on my way home. Even though a short distance from home, to go there first would lose 10-15 minutes of daylight.


Looking across the bay at the museum I was unhappy with what I saw through the lens and thought I didn’t understand it properly. Yet a boat quite close and a building behind me seemed fine. 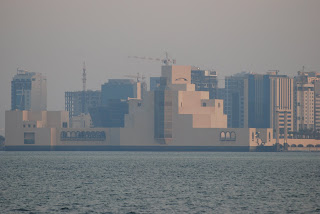 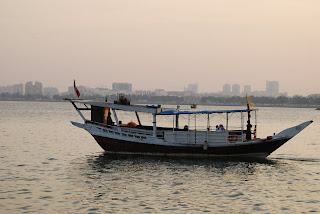 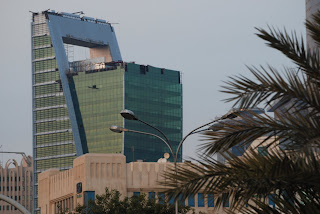 Colleagues out exercising along the Corniche paused to talk and we spoke, as many of us have, about the warm winter. Not once this year have I even wanted a scarf around my neck against the morning chill. Lately during the day it has been in the low to mid-seventies (Fahrenheit). We also lamented how incredibly quickly and early evening falls – dark by 6:00 p.m.

I soon left for home where I downloaded the few photos I took, noticing with pleasure the museum details, focussing on the side of the museum opposite its entrance, although wondering again about the gentle haze surrounding it. This morning when I looked out the windows, as President Obama was finishing his first press conference, I saw that I could see out the top half of the floor to ceiling windows but the bottom was obscured. An hour later as I prepared to leave, there was no visibility. On the 16th floor I appeared to be in the middle of a cloud. Driving to work was tortuous, with visibility reduced to 100’ or so. Car lights were on not to see through the dense fog but to be seen. The particular local custom of putting the flashing lights on in fog was evident although I see no improvement over simply lights on. Most drivers were cautious although a few continued to drive at speeds above the posted limits. I arrive safely although I expect there will be a number of accidents during the rush.


I now understand the haze that enveloped the museum across the bay last evening was a foretaste of this morning's dense fog.

A day after the dense fog we had a serious sandstorm and the pictures in the embedded slideshow were taken 5:00 - 5:20 pm, a good 6-7 hours after the worst. Driving home, a brief 20 minute commute, I was aware of the grit in my teeth despite the completely closed windows. The sand is fine and seems to enter miniscule openings in the car and even our pores.
Posted by Susan at 10:26 AM