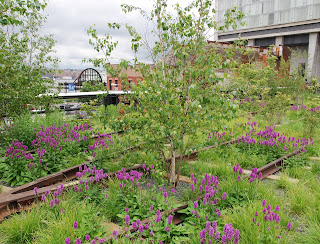 I was fortunate enough to return to New York shortly before the High Line, an elevated railroad now a city park,opened on June 9, 2009. The High Line was built in the early 1930s and served actively until 1980 bringing materials, including cattle, to the industrial and meat-packing area in Manhattan. The park extends from Gansevoort St to 20th at this time, with a middle section to 30th St planned to open in the fall of 2010. The northernmost section to 34th St near the Javits Convention Center is still in negotiations and its future uncertain. The 1990s saw the elevated railway covered with wild grass and trees. Some folks clambered up the sides to explore and, as plans developed to dismantle the railroad, community support for its redevelopment as a pedestrian park grew. Wikepedia illustrates how the Gansevoort end looked before renovation, with a rendering of how it will (and does now) look. As comparison, my image of the wooded section at the southern end here shows how the actual trees and plants on the southern end appear. The plantings are based on the wild plants that rooted after it was abandoned. 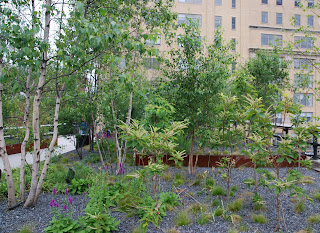 Much as been written about the park and its opening; I link to a few articles here. I also offer a slide show of photos I took while on home leave in New York City in June. A month of rain and grey skies kept me from seeing this park in sunlight. I look forward to that at some point as well as to seeing it at night (open from 7:00 a.m. to 10:00 p.m.) and in winter snow.

From the official High Line web site I repeat some of the history:

The High Line was built in the 1930s, as part of a massive public-private infrastructure project called the West Side Improvement. It lifted freight traffic 30 feet in the air, removing dangerous trains from the streets of Manhattan's largest industrial district. No trains have run on the High Line since 1980. Friends of the High Line, a community-based non-profit group, formed in 1999 when the historic structure was under threat of demolition. Friends of the High Line works in partnership with the City of New York to preserve and maintain the structure as an elevated public park.

The project gained the City's support in 2002. The High Line south of 30th Street was donated to the City by CSX Transportation Inc. in 2005. The design team of landscape architects James Corner Field Operations, with architects Diller Scofidio + Renfro, created the High Line's public landscape with guidance from a diverse community of High Line supporters. Construction on the park began in 2006. The first section, from Gansevoort Street to 20th Street, is projected to open in June 2009.

1847
The City of New York authorizes street-level railroad tracks down Manhattan’s West Side.

1851 – 1929
So many accidents occur between freight trains and street-level traffic that 10th Avenue becomes known as Death Avenue. For safety, men on horses, called the West Side Cowboys, ride in front of trains waving red flags.

1929
After years of public debate about the hazard, the City and State of New York and the New York Central Railroad agree on the West Side Improvement Project, which includes the High Line. The entire project is 13 miles long, eliminates 105 street-level railroad crossings, and adds 32 acres to Riverside Park. It costs over $150 million in 1930 dollars—more than $2 billion today.

1934
The High Line opens to trains. It runs from 34th Street to St. John’s Park Terminal, at Spring Street. It is designed to go through the center of blocks, rather than over the avenue, to avoid creating the negative conditions associated with elevated subways. It connects directly to factories and warehouses, allowing trains to roll right inside buildings. Milk, meat, produce, and raw and manufactured goods come and go without causing street-level traffic.

1950s
Growth of interstate trucking leads to a drop in rail traffic, nationally and on the High Line.

1960s
The southernmost section of the High Line is demolished.

Two things are especially worth remarking on here. The first is a temporary installation. 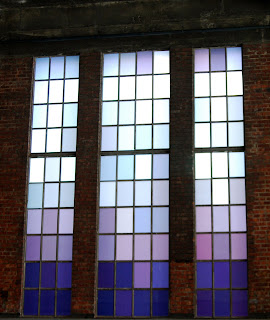 "The High Line also opens with a major, though temporary art installation by Spencer Finch in association with Creative Time. “The River That Flows Both Ways,” is 700 individual panels of glass — in hues of blues, purples and greys — fitted into the original High Line window panes that allowed light into the bay of the Nabisco building. Finch plays with parallels between the rail line, where trains ran north and south — and the Hudson, which is not actually a river, but an estuary, and flows “both ways” during each day.
The glass colors are based on the shades of the Hudson. Finch fastened a camera to a tugboat that traveled from the 79th Street Boat Basin up to 120th Street, down to the harbor and back to the basin. The camera took a picture a minute for 700 minutes. The 700 pieces of glass correspond to those colors, starting in the upper left, moving across the top, reading from left to right like a book, according to Meredith Johnson, a curator and producer with Creative Time.

The glass installation will stay up for one year, and when it comes down, only the glass will be removed as the original panes will remain. The architectural glass installation is on the High Line upstairs from Morimoto restaurant."

The second item to be mentioned is the wonderful spontaneous performance on the fire escape of a very near-by apartment. It is described in recent New York Times column , A Firescape Cabaret, complete with its own multimedia show. I had noted each time I visited the High Line laundry hung out on the fire escape. One friend with me suggested that this was deliberate and part of a much larger thing than laundry. She was right, as the NYT piece reveals.

Just after 9 p.m. on June 17, the third installment of the High Line Park Renegade Cabaret was held on Patty Heffley’s fourth-floor fire escape. There were colored lanterns, and a festive array of undergarments hung from the railings.

The Renegade Cabaret Ms. Heffley, 55, a former punk rock photographer, had staged a laundry “installation,” as she put it, to bolster the live performance she was hosting. Elizabeth Soychak, a jazz singer and professional organizer who gives her age as “permanently 39,” wore a 1950s moss green chiffon dress and waited while Ms. Heffley, in black, introduced her.

“This is in response to 31 years of obscurity,” Ms. Heffley announced from the fire escape. “Now, every day there are thousands of people looking in my window. We’re not here to celebrate, we’re here to exploit. Welcome to the Renegade Cabaret.” Then Ms. Soychak launched into an a cappella rendition of Johnny Mercer’s “Early Autumn.”

Location, as all New Yorkers know, is destiny, and Ms. Heffley is embracing hers with gusto.

Posted on July 24: Since I returned to Qatar, more has been published on the Highline. One piece comments on the number of visitiors, giving lie to the suggestion that this park was only of interest to people living in the area.

The High Line is still under construction, with orange-vested workers busily adding last-minute touches. Yet the park, perched on an old elevated railway on the West Side of Manhattan, already seems like a permanent fixture, almost a small town in the air. ... A little more than a month since its first stretch opened, the High Line is a hit, and not just with tourists but with New Yorkers who are openly relishing a place where they can reflect and relax enough to get a new perspective on Manhattan. ... Weekdays it draws from 3,000 to 15,000 through its entrances at 20th, 18th, 16th, 14th and Gansevoort Streets. Weekends are busier, with roughly 18,000 to 20,000 visitors a day; but the park’s legal capacity is 1,700, so officials have often resorted to “special entry” for an hour or two, limiting entry to Gansevoort Street and, for those needing an elevator, 16th Street.