Weather in this part of the world

DOHA: A strong dust storm hit Qatar yesterday, adding to the woes of the people already struggling to cope with an intense heat wave. The sandstorm drastically reduced visibility, causing difficulties to motorists during the early hours. Hospitals and clinics in Doha witnessed an increase in the number of patients reporting respiratory problems.

The storm hit the city early in the morning and settled around 9.30am before gaining strength by 11am. After a two-hour respite, another wave of the dust storm hit the country around 4pm. The bad weather forced many families to stay indoors as strong winds whipped up dust and sand, creating a dust haze in the city for long hours.

The city’s otherwise busy markets and shopping malls were virtually deserted in the morning due to the heat and dust. Motorists were forced to slow down on the city’s major thoroughfares due to the poor visibility. Many vehicles were seen plying with their headlights on. Though visibility was reportedly reduced at Doha International Airport, there was no official confirmation of flights being delayed or re-scheduled.

The thick dust haze brought work at many construction sites to a standstill for a few hours in the morning. Workers at project sites in the West Bay area were seen running for cover from the dust-laden winds.

Officials in the meteorological department said the bad weather was caused by high pressure that had developed over the northwestern part of Saudi Arabia and was moving towards the east. The dusty conditions will continue till tomorrow. Visibility is expected to be reduced to one kilometre or less at times, the weathermen said.

Driving home last evening (to the above mentioned West Bay area), three to four kilometers outside the city, there was no city to be seen. Only as the distance closed to 1-2 km did the buildings, surrounded by grey dust, begin to become visible.

I offer two pairs of views outside my living room window: in each pair, the clear one was taken on the 27th; the second taken on the 30th. As the weatherman in the Perninsula indicates, the weather continues thick and dusty today with virtually no visibility. 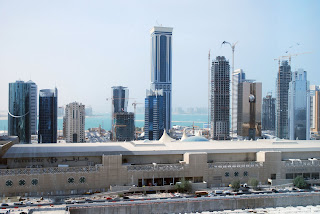 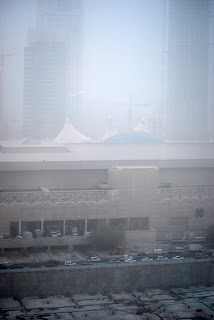 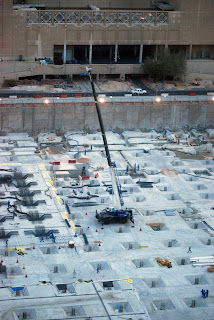 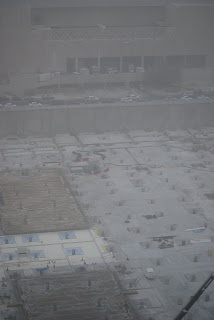