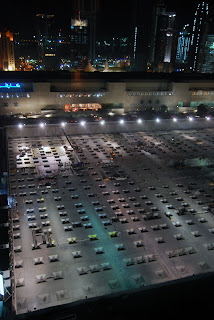 All across the city of Doha construction is intense. Around Education City, in the west of Doha where I work, heavy trucks routinely fill the roads and round-abouts, and the number of cranes is extraordinary, as the Qatar Foundation rushes to put in place the building for Northwestern, the newest U.S. institution to join us, and Sidra Hospital, our teaching hospital. Other construction there includes a convention center and planned secondary schools.

From Education City east to the Corniche older buildings are coming down and new ones going up. On all sides of my apartment building, 14 km east of Education City and just off the Corniche, is intense construction. My apartment itself faces north with many city buildings between it and the bay to the north. Chief among them is the large low City Center Mall that does not obstruct the view to more buildings and water, as is clear from the images. Between the mall and my apartment is a construction zone whose divisions suggest three separate planned buildings. Recently heavy machinery and sounds and views of very active construction in the center zone have entered our lives, at least as early as 4:30 in the morning and later than 10:00 at night. I have not tested if it ever stops. The opening image, taken last evening, was shot, of course, from within my apartment, as were the next three.

The image below shows the construction site in early March of this year when there was no obvious activity. 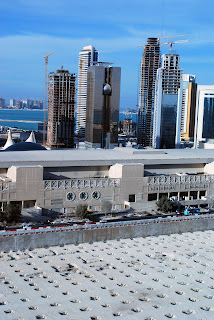 The third image shows the site during the day in late June and the fourth image, cut from the lower right of the June photo, offers a rendition of the building that is under construction and for which the intense foundation effort is now underway. It is called the Doha Convention Center and Tower and the picture shows a large low building and a great tower. 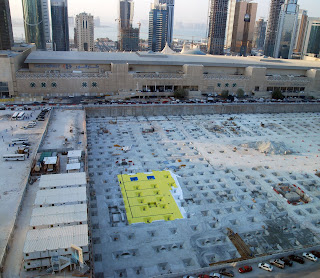 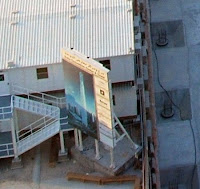 Wikipedia reports the following, indicating it will be the 6th tallest building in the world. The news of suspension of construction reported below may now be superseded by activity outside my windows. We shall see.

The Doha Convention Center Tower is a skyscraper under construction in Doha, Qatar. The tower is expected to be 551m (1808 ft) tall and have 112 floors. The status of construction is that the steel frame is under assembly, and, when that stage is finished, the glass cladding will be started. The estimated completion date is 2012. In 2009, the CTBUH [Council on Tall Buildings and Urban Habitats] informed on its website, that construction on the tower has been suspended. When completed it shall be the sixth tallest building in the world. It will preceed the Abraj Al Bait Towers in Mecca, Saudi Arabia and surpass the 1 World Trade Center in New York City, New York.

Although I see nothing on the CTBUH web site recently about the tower under discussion here, I do see that its latest newsletter reports on the Kamal Tower now planned for Doha. You can see images of this planned building here.

It appears that, once in place, the tower in my frontyard, so to speak, will be strategically located so as to block the view from my apartment of my favorite building - the copper sheathed structure with the silver ball – seen in the images above across the construction zone and the other side of the City Center.

This fascinating building appears as well in the last image here, taken in March 2008 from the front of the City Center. 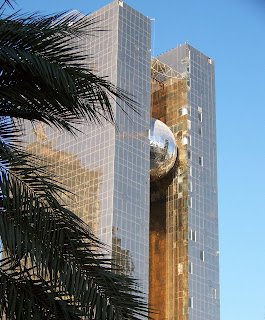 On March 16 of this year I posted an entry on the very large building just south of my building, my backyard so to speak. It is called The Tornado and today, the 12th of July, a regional newspaper, The Gulf Times, reports it

"has been awarded the 2009 accolade for Best Tall Building in the Middle East and Africa by the Council for Tall Buildings and Urban Habitat (CTBUH). This is the first time that any building in Qatar has won such a prestigious award."

The article indicates that

"The principle criteria used by the CBTUH awards committee to form their judgment for these awards, is based on the projects displaying extraordinary contribution to the advancement of tall buildings, bringing fresh ideas and innovative processes which would not only help advance the profession of design but also, improve the ambiance and the well-being of the inhabitants of the cities where they have been constructed."

"One of the highlights of the 200-m high Tornado Tower is its spectacular external lighting system created by renowned light artist Thomas Emde. The system is capable of displaying 35,000 different combinations that will further enhance the hyperboloid structure of the tower, based on desert storm concept design."

And this outside my bedroom window! The full article is available here. I add a photo of mine taken in October 2008. It shows The Tornado in proximity to my apartment building,furthest on the left. To the right, of course, is The Tornado. 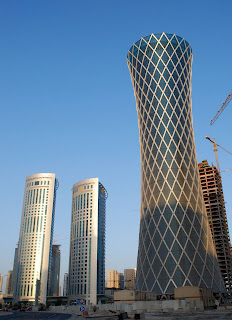